Assessing the Executive Presence of Alexander Hamilton: Using a 21st-Century Lens on an 18th-Century Leader

By: Scott Weighart, Director of Learning and Development

What’s the hottest 21st-century musical?  Without question, it’s the improbably brilliant Broadway show based on an 18th-century founding father, Alexander Hamilton. Relying on a multicultural cast and featuring a contemporary blend of rap and R&B with the occasional touch of Les Mis and Britpop, Lin-Manuel Miranda’s ingenious show is sold out for months in advance. On June 12, the Tony Awards were dominated by the show, as it pulled 11 of the coveted trophies.

All of this got me thinking: Given the present-day interest in the “Ten Dollar Founding Father” as they say in the show, why not use a 21st-century leadership model to share some insights on a great 18th-century leader?

Now that I have obsessively listened to the soundtrack, read Ron Chernow’s excellent 800-page biography, and read Miranda’s own new book featuring the libretto and all his notes on the show’s creation, I have a pretty good sense of how we can rate Hamilton according to our present-day rubric for executive presence.  In the graphic below, I’ve circled Hamilton’s biggest strengths in green; the qualities in red represent the ones that represent gaps. 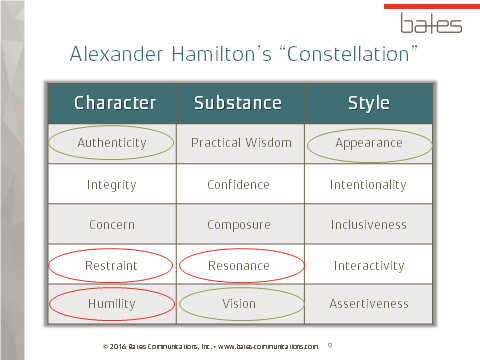 Hamilton was off the charts when it came to dreaming up what our nation could become. He laid out how our new government would function, came up with the idea of military academies, and basically got our economy off the ground. This was a guy who could think big and wasn’t afraid to buck conventional wisdom. His top strength would have to be Vision, which is equal parts strategic thinking and inspiration.

Our first Secretary of the Treasury was also quick to take a stand and was extremely transparent about his opinions—to a fault at times. One recurring theme in the musical is Hamilton’s irritation with his nemesis, Aaron Burr, because Burr keeps his cards close to the chest, seeming to have no real beliefs.  Hamilton always had an opinion and prided himself on telling it like it is—regardless of the consequences. That makes Authenticity the most defining element of his Character.

With the possible exception of Teddy Roosevelt, you’d be hard pressed to find a political figure in US history who could match Hamilton’s sheer energy. Hamilton worked tirelessly: As just one example, Hamilton wrote 51 of the 85 Federalist Papers in less than ten months... and the US Supreme Court still relies on them when interpreting the constitution. Combined with his genius in Vision, you have a founding father who came up with amazing ideas--and then worked tirelessly to make them a reality. This makes Appearance another signature strength, as that reflects a leader’s energy as well as image.

What about the other side of the coin with Hamilton’s executive presence? His Achilles heel was the quality of Restraint—which we can think of as the flip side of his Authenticity. In the musical, Burr sings, “Hamilton doesn’t hesitate/He exhibits no restraint.” Hamilton was quick to react—a key to his speedy output but also a real liability. When anyone pushed Hamilton’s buttons on matters of personal honor, he was very quick to escalate the situation. Many times, he turned a disagreement or conflict into a real war of words—including his fatal duel with Burr.

Toward the end of Act I in the play, Burr chides Hamilton: “Why do you assume you’re the smartest in the room? That attitude might be your doom.” Many contemporaries viewed Hamilton as an insufferable know-it-all, and this affected his ability to bring people together. Thus Humility is another quality that would rate lower with the legendary founding father—just as some contemporary leaders can be held back by needing to come across as the smartest person in the room.

In the biography, Chernow mulls why such a brilliant man was never considered as a presidential candidate. One major reason is that Hamilton never really had his finger on the pulse of the American public. His boss, George Washington, possessed this quality in spades, and it was a key to his incredible tact. Hamilton had a big gap in Resonance—a leader’s ability to be attuned to the needs and concerns of others.

Hamilton’s great strengths explain why his influence is still felt today in our economy and culture.  His deficits give us insight into why his star failed to rise even higher as well as why his life was cut short.

All leaders can benefit from better understanding their strengths and gaps when it comes to executive presence. In the words of the musical, acting on that understanding can help rising leaders say, “I’m not throwing away my shot!”

3 Things an Executive Can Do: Influencing in Passive-Aggressive Cultures