When You Are Lost 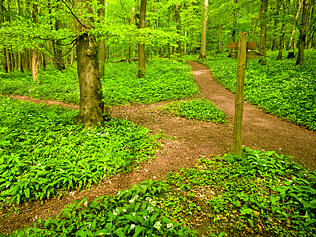 It can happen more quickly than you think. One minute you’re enjoying a lovely hike through the woods, and next thing you know, you seem to be off the trail and clueless.  This is what happened to me last week when I happened upon the trail sign: Frog Pond.

It looked to me like a manageable hike.  I had the time. My husband was home, content to do his own thing.  The morning was young. Sure, the trail map bin was empty, but my spirit of adventure was strong.   So, I took the path, a crisp fall morning fueling my ambition, a mobile phone in my pocket assuring me I couldn't get into too much trouble.

The first quarter mile was exhilarating.  Each turn revealed the visual respite I longed for--red maple and hackberry leaves fluttered in the light breeze, patches of water through a canopy of white ash and Atlantic birch cedar.  Underfoot, a mix of soft White Spruce needles and man-made wood chips assured me that the path was well trodden and safe.

But as the minutes ticked by, I found myself utterly alone in unfamiliar surroundings.  Little questions began to disturb my peaceful walk.  Had I seen a blue trail marker lately?  Was it weird that I had seen only a single jogger, 10 minutes ago?  How long was this trail, anyway? Had I zagged right, when the pond route should mainly veer left?  All the trees began to look the same.

Technically “freaking out” may be the first thing most of us do, but after the panic attack, you do have to figure out what to do if you’re lost in the wilderness. What I did was technically correct, according to wilderness manuals, though it definitely did not improve my situation.  I found a clearing, which is what experts recommend.  I took a wide open trail space up a hill which landed me in a subdivision.  Safety.  Sounds good, right?

However, I realized to my disappointment that I still didn't  know the area.  I had not landed back where I had started. I had bailed too early, and now I was still sort of lost. Strange as it sounds, I felt even more paniced in a neighborhood full of homes: There were few people still around in this summer resort. I had to decide when and how to ask for help.

I walked up the street a quarter of a mile one way, turned around and went in the other direction.  Nothing familiar. I then threw in the towel.  When I spotted a minivan with a family of four, I put out my thumb.  They kindly offered me a ride to a place I knew.  By that time,  I had left my husband two voice mails and two text messages, to which he hadn't responded because he was watching a football game.  He listened  after I got home, gently pointing out I had been gone two and a half hours.  We had a good laugh.

What I learned were three things.  First, a map would have been a big help.  Second, doubt creeps in in when you take a new path.  Third, you can't count on your emergency lifeline.

This is a metaphor for challenges you face as a leader.  Clearly, you need a map, because  you will face doubt, and there may be no one there to save you.

This is why we created our Bates NAV System.  We realized as we worked with leadership teams that if we helped them create a roadmap,  they wouldn't feel so lost.  They could refer back to it when they felt doubt. They would be less likely to bail out too early.  They wouldn't have to go to the lifeline because it may not be there anyway.

Suzanne is CEO of Bates, an internationally recognized thought leader in communicative leadership, and the author of four bestselling business books including Speak Like a CEO and All the Leader You Can Be. After a 20+ year career as an award winning television journalist, Suzanne founded Bates in 2000 with a mission to help leaders shape the world by engaging, aligning, and inspiring people to act. She has developed proven coaching and consulting methodologies and leadership programs that are now used by hundreds of global companies to help their leaders drive business results. In 2013, Suzanne and her team developed and launched the Bates ExPI, the first research-based, scientifically validated assessment to measure executive presence. She is a sought after speaker and has been featured on the TODAY Show and in the Wall St. Journal, Fortune Magazine, Fast Company, Forbes Magazine, and The Huffington Post, among other publications.