Head, Heart, and Hands: A Model for Thoughtful Leadership

Over the last few months, we’ve been completing a pilot study of a new assessment tool, the Bates Executive Presence Index (ExPI). This is the first-ever scientific assessment of executive presence and influence, so we’re excited about it.

In order to test out this multi-rater assessment, we’ve had 100 leaders at 20 companies go through the process. This includes a one-hour feedback call in which we discuss the results.  As you might imagine, people are always curious—and often anxious—about how they were rated by their supervisors, peers, and direct reports.

Several weeks ago, I conducted a feedback call with “Diane.”  Like most leaders who get this feedback, Diane immediately wanted to talk about the results that were troubling to her.

Before we dug into those concerns, we spent some time making sure she appreciated her strengths. People had noticed her appearance in a positive way—the degree to which she was showing up looking ready for the game; everyone agreed she had a lot of energy. They also rated her interactivity: Clearly Diane was not the type of leader that liked to hide out in her office!

When we dug deeper into the report, though, we found something interesting. She had rated Authenticity as one of her strengths, but others had given it the third-lowest score of the 15 facets of executive presence.

Understandably, Diane was confused to learn that Authenticity represented a “blind spot” for her. “I view myself as very transparent,” she said. “I think I’m quite direct and straightforward.”

So Diane was viewing her Authenticity as a strength. And I agreed! “What’s happening here is that your authenticity is not coming though completely for people. That doesn’t mean you’re not authentic: It just means that people aren’t seeing enough of those behaviors to get that from you.”

After we reviewed the results of some specific items under Authenticity, we talked about ways in which her sincerity and genuine nature could be perceived more consistently by others.  This was clearly an issue—especially with her direct reports.

I encouraged Diane to use a model that I’ve found to work well for leaders: Head, Heart, and Hands. This is a way of letting people know that you’re paying attention to their thoughts, emotions, and actions. 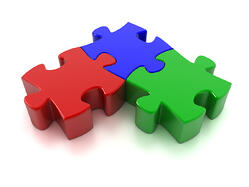 As Diane listened to one of her direct reports talk, she could start with the Head perspective, asking herself: "What’s the quality of thinking that I’m hearing?  Is he showing me insight?  Is he framing the content in a good way?"  If that wasn’t clear, then she could ask a question to get a better sense of that.  This would build her confidence in the quality of the thinking—while also stimulating rethinking for her conversational partner.

As for the Heart piece, that goes to emotion and motivation. When listening to someone, Diane could ask herself, “What is this person experiencing emotionally? Are they excited?  Frustrated? Hesitant?" If Diane notices one of these emotional states, there’s an opportunity for her to make a process observation: “John, I’m noticing that you’re not ‘all in’ on this plan right now… so tell me, how are you feeling about this?” Sometimes people will feel things before they really know or understand them, so being alert to these hints can be valuable for leaders.

The final part is the Hands piece. Diane could focus her attention on whether her stakeholders were acting as if they knew what to do… or not. Was there a skill issue here? She could find it by focusing on what people’s actions were telling her.

I encouraged Diane to try some of these new strategies for the next 60 days. After all, Rome wasn’t built in a day. I encouraged her to give herself a chance to take a fresh look at her team—to show curiosity in them and what they’re doing. This was an opportunity to consider a developmental coaching strategy to help them assess what they need from her and how she can help them… while signaling that she’s approaching the relationship a little differently.

It may take some practice, but leaders who can slow down to pay careful attention to their direct reports in this way will develop teams who have their heads in the game, hearts on the line, and hands at work to build a better organization.