When I was 22, life was fantastic but a little crazy. Each day, I worked as a substitute teacher in Boston Public Schools. Four nights a week, I took evening classes as a full-time MBA student. But from Friday afternoon through Sunday, my main priority was playing on the Ultimate Frisbee team at Boston University. That had a great deal to do with how special it was to be a member of that particular team.

Ultimate Frisbee is often misunderstood. I read an article once claiming that Ultimate is the actually the sport that demands the most of the cardiovascular system. Sometimes our team would play seven or eight games in a weekend tournament. I had to drink banana milkshakes all week to make up for the five pounds or so I would drop each weekend. By the time I went back to work and school on Monday, I often could barely walk. My colleagues and classmates didn’t understand.  “You played Frisbee all weekend, and you’re this sore? You must be in really bad shape!” 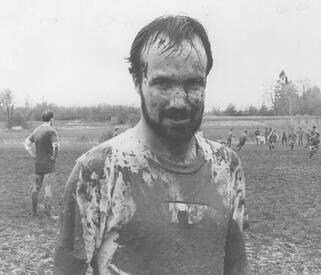 But I didn’t care about that. Why should I? I was doing something I loved, and—most of all—I had tremendous teammates—several of whom are good friends to this day. Thinking back, there were some interesting things that were understood even though we never discussed them. Bear in mind that it’s not that easy to throw a Frisbee to a moving target on a windy field covered with players. Still, the goal was to have the Frisbee hit the person between the bellybutton and the sternum.   If you didn’t—and if the person dropped it because it was even slightly off target—you’d shout out, “Sorry—bad throw!”

But if you were receiving a throw, your mentality was completely different. My internal mantra was always “If you can touch it, you can catch it.” So if your teammate overthrew you, you might end up making a face-first dive, only to have the disc graze your fingertips and drop, turning it over to the team.

What would happen then? Sure enough, the thrower would say, “Sorry—bad throw!” And your response?  “No—I should’ve had it!”

The sense of team spirit showed up in lots of other ways. People would share stories about a teammate’s unbelievable catch or key defensive play.  More than once, I had a stranger come up to me at a party and say, “I hear you’re an amazing Ultimate player!” When we lost games, people stepped up to take the blame… and when we won, they were quick to give credit.

What was the impact of being on such a team? It made me want to do whatever I could to help the team win. I hated the idea of letting such good people down. We endured long drives in a van, usually sleeping on somebody’s floor. I often ended up bleeding, aching, dehydrated, and completely exhausted. The picture you see here is a day when I made about eight headlong diving catches on a field at SUNY-Purchase in New York that was basically a two-inch deep layer of sticky muck. None of us ever thought twice about going all out regardless of the weather and the circumstances.

When I think of the best teams I’ve worked with professionally, they had a lot in common with that Frisbee team. Great leaders create a culture where everyone wants to own the responsibility for success—and be the first to acknowledge their own part of it when things don’t work out.

On outstanding teams, people work really hard. But it doesn’t seem like such hard work. When leaders and teammates are quick to sing your praises and own their share for the occasional defeat, you’ll be ready to leave it all on the field.

Although as this photo shows, there were times when the field was left on me.