Sales Lessons from a College Tour

My daughter is starting her senior year of high school, so she is already getting to be a wily veteran of college tours.  So after we wrapped up a tour at a top university a few weeks back, I was eager to hear her critique.

She didn’t mince words.  “There was what—three of us on the tour who might apply?” she said.  “So I was really surprised that he didn’t ask any of us for our names... or what we might want to major in… or even what questions we’d like to have him answer during the tour.” 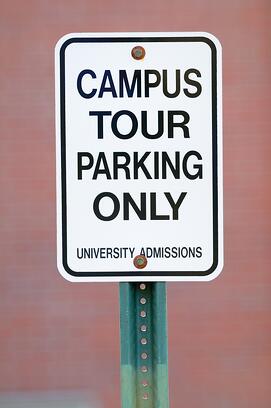 She went on to note a few other ways he came up short, including the guide’s use of a word that you might expect to hear at a frat party but not on a college tour.  But I thought she had hit the nail on the head with her first comment.  Our tour guide was obviously a very bright kid.  Yet he began the tour by telling us about the history of the prestigious school.   No one cared.  He went on to give us statistics about the school’s size, location, and buildings—marginally interesting at best.

A few times we stumbled on a golden nugget of information quite accidentally.  He happened to mention his internship, so I asked him if it was paid.  He said it was, so I risked being a little impolite and asked how much.  He stopped to think, doing the math.  Then he said, “I worked at an investment bank in New York City, and they paid me about $20,000 for a ten-week internship.”  Whoa!  That got everyone’s attention.

He also finished on a terrific note.  He told us the story of how insecure he felt when he showed up for orientation at this prestigious university.  “I was sure that they had made some type of mistake when they accepted me,” he admitted.  “But we had orientation leaders who seemed to know everything, and they helped me realize that I really did belong here.”

Given the nature of my work, I did a mental makeover of the tour, imagining how great it could have been.  He should have opened with that story: It was honest, engaging, and it surely would have resonated with the kids on the tour, who are well aware of the school’s low acceptance rate.

From there, the next step would have been to get us involved—ask us some questions, find out who we really are and what we want to know.

After that, it gets easy, doesn’t it?  He could have skipped over the stuff that didn’t interest us and changed the whole itinerary of the tour.   Maybe my daughter would have been able to see the new biology labs, for example.  That would have been terrific.

Of course, our guide was just a college student and probably a volunteer.  The really interesting thing that struck me, though, is that I have seen the exact same mistakes made by experienced salespeople!

It’s a lament that I’ve heard from many senior leaders when talking about their sales teams.  When many salespeople meet with potential clients, they force people to sit through a bloated PowerPoint deck that focuses on their company—how old and big and great it is—before running through the features and benefits of their products and services.

As a leader, you need to create a culture in which everyone focuses on understanding your customers and prospects inside out.   It comes from knowing how to ask questions, talk about what matters to people, solve problems, and ideally engage in insight-rich conversations.

If that doesn’t happen, your potential customers may end up feeling as we did on that beautiful campus that Saturday: We went in a big circle… but we didn’t end up getting to where we really wanted to go.

All he had to do was ask.