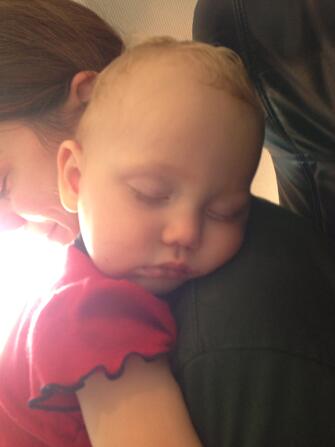 Getting on a commuter jet from Minneapolis to my next stop, I noted with relief the seat next to me was empty. I'd had an unusually pleasant streak of flights where my bags stowed easily in the overhead, I enjoyed extra legroom, had quiet seat companions, even an empty middle seat on a coast to coast flight.  My fortunes were of course about to turn. As the flight attendant prepared for departure, a young woman with a baby and all the paraphernalia came puffing through the door, walking down the aisle, stopping at my row. "We're in here," she said, exhausted and perhaps a little apologetic.

The baby was 15 months old with big blue eyes and wispy blond hair, sporting black Mary Janes with little orange and red daisies. She went to her tasks immediately, dismantling the seat pocket magazines and safety card, tossing Cheerios out of the Tupperware. When she got bored with that, mom taught her to test the up and down slider function on the window shade. This held her attention for a minute or so. As she grew squirmier and squirmier I suspected it wouldn't be long until she completely disintegrated.

The flight attendant came by and reminded her mom to please turn her around into the recommended lap baby position, which is facing you with arms around the neck. I'm sure that's very simple when you have three baby actors to stand in when you're filming an airline safety film. In real life, good luck to you. She was having none of it, finally launching into a tirade of baby sobs and screams. I opened my new Tana French mystery novel and tried to will myself into an airplane trance, pretending it was just background sound. My decision had the effect, I think, of making the baby more desperate. We were only now taxiing out to the runway. This was going to be one loooong flight.

As a mother myself, it is hard to admit this, but there is a limit to my tolerance for crying babies on board. I always wondered how the people sitting next to crying babies didn't go mental. Now in that very circumstance I had no choice but to grimace and bear it. After begging the flight attendant, the old guy across the aisle got himself moved before takeoff to a seat further in the back.

In the height of my misery, as we reached 10,000 feet, I felt that flash of recognition. How selfish and unkind I was. More important, how stupid I was not to take action to improve my own circumstance.

I put down the book, opened up the Delta Sky magazine and made eye contact with her. I started talking to her as if she were 15, not 15 months. I opened it up to a photo of Rory McIlroy swinging a golf club. "All the girls love him" and her eyes opened wide. She started to quiet down. Next, we counted the horses on the beach in the ad for Golden Aisles, Georgia with the pretty girl in cowboy boots. "Let's go shopping later and get some just like that," I suggested. We counted the diamond rings in the Henri Daussi jewelry ad. "This is what a boy will give you someday. I like the one with the pink stones, how about you?" As we flipped through the pages, she fell into a trance, staring at the page, then looking back at me. Those beautiful blue eyes started blinking, then the lids drifted to half-mast. As she laid her head down on her mom's shoulder and fell asleep her mom said simply, "Thank you." I asked her name. "Sidahra."

Victor Frankl, Ph.D., the Austrian neurologist and psychiatrist and Holocaust survivor once said, "When we can no longer change a situation, we are challenged to change ourselves."  There's much to learn for anyone like me who doesn't come by patience naturally. My thought is that if you're going to be good at altering your approach to BIG situations, you need to practice with LITTLE ones. (Click to Tweet!)

For instance, you can't expect to maintain your composure in a heated debate over a business decision if you haven't practiced patience standing in line. You can't be the one to shift the negative energy in a difficult meeting if you don't try keeping your cool when a crazy driver cuts you off. You can hardly expect to navigate the emotional ups and downs of challenging project, if you haven't looked at a crying baby and thought there may be something you could do.

She slept all the way.  I asked her mom if I could take her picture before we got off the plane, and she said yes. The photo above is now and forever a visual cue to practice changing myself, whatever the circumstance.