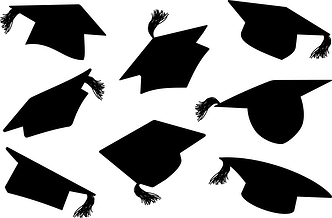 For a few days now I've been trying to understand what might have led to the most embarrassing disaster of a commencement speech at a college graduation I have ever attended.

I am not kidding.  It was really unfortunate.  An otherwise picture-perfect spring day with celebration in the air; heart-breakingly blue sky, green-as-green-can-be green lawn dotted with moms in pink, orange and green print dresses; sisters and boyfriends toting pretty flower bouquets; graduates drowning in flowing gowns; dads doffing sport coats and juggling cameras; one of those moments you want to hold onto forever.

Not that anyone usually cares about the speaker.  You're usually happy if they just keep it short and sweet.  And, looking at his bio in the program, I thought it might be good.  He had had a cool career in an interesting field, though he was not famous.  Apparently no one happened to mention that fact to him.  He elected to dust off his resume and share every detail of his life, without a point.

People listened politely for several minutes; but as it progressed, or rather, as it went nowhere, the whispering began.  They weren't just discreetly checking their watches; they were twisting and squirming in their seats.  Yes perhaps it wasn't the kindest, most generous and forgiving audience.  But they couldn't help themselves. The texts were flying.  "can u b-leev ths?"  "Really? REALLY??" And I'm not talking just about the 22 year olds.

If only he had defaulted to the classic commencement staple...simple, platitudes, short on specifics but long on encouragement...it would have been appreciated (and forgotten) long before the mortarboards were tossed into the air.  Instead, he left no fact about his life unreported, sharing not only what year he got married and when he bought his first home, but also the interest rate he paid on his first mortgage, how well qualified he was for several big jobs, and why he had without a doubt some of the greatest successes you can have in his field. That would have been educational, and quite tolerable, had he been Stephen Hawking,  Steven Spielberg or Stephen King.  He was not one of those Steves.

I actually don't believe he was a narcissist at all. I just don't think he knew how to write a speech.  He made the mistake of thinking that just because you are invited to speak, that people are interested in you.

Rule one in speaking is that your talk should be about your audience.  Yes, you can and should tell stories from your life, but they need to have a point. As we say to our clients, you don't want to be the HERO of your own stories.  Instead, share the lessons you've learned.  Success is great, but failures and mistakes are a lot more interesting.  Whatever you do, connect your experience to the audience's.  We call this "the leader as learner."  But dusting off the old resume without reflecting on the meaning of these events is going to be a big disconnect.

It's a shame, it could have been really good, with just a few tweaks.