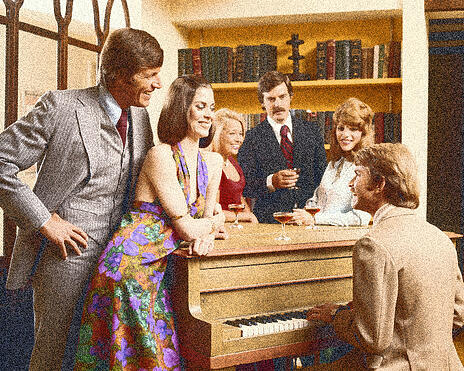 A few weeks ago, friends from my Tampa television days called to let me know that our former colleague, my former co-anchor, had been ill for months. A couple of people knew. He was turning the corner. They thought. Three weeks later, he died of a hospital-born infection that had invaded his weakened body.

I hadn’t seen him for years. I’d sent Christmas cards, but somewhere along the way, he wasn't on the list anymore. I heard about him from other friends, like when he retired and planned to play golf.  I always assumed I would see him again.

At the funeral, it was amazing to see everybody, as sad as it was. The years melted away. Those had been Camelot times. Lots of late nights, too many drinks but never too much laughter. When the bar closed we’d extend the merriment at the home of a friend with a grand piano, where we huddled around singing Billy Joel’s Piano Man at the top of our lungs. With the gusto of fond friends that know, it probably won’t last forever. This feeling.

Weddings and funerals. These days, they are the reasons to be in touch again.  Another brief trek back in time. Painful, that in spite of your intentions, life moves on.

So many of those strong connections just…fall away.  We don’t mean for it to happen.  But it’s impossible to stay connected to everyone.  Even my college-graduate daughter is learning.  On the night after graduation, she looked around the bar where the class had gathered and thought, “I will never see most of these people again.”

I’ve always marked the chapters of my life by the cities where I lived, six in all.  Only a handful of friends survived all the chapters.  The rest, when I see them, it's like we never left.  We just don’t get together very often.  If ever.

Perhaps that’s why I was struck the other day when I came across a study that found the number of Americans who felt satisfied with the way their lives were going has dropped 30%.  The primary reason? Americans’ declining attachments to friends and family.  Lower participation in social and civic activities, and diminished trust in political institutions accounts for the rest.  According to Chris M. Merbst of Arizona State, the ranks of the most dissatisfied rose by nearly 50%.

I think that’s what prompted me to email one of my oldest, bestest friends and suggest last minute plans, dinner the next night.  (It worked.)  Usually, planning is a nightmare. That endless back and forth.  (“Oh gee, we’re at the Cape that week.” “Sorry, Jess has basketball every Saturday until May.” “I wish we could but we’re in Italy.”) The date on the calendar for four months has a 50/50 chance of actually happening. It’s not for lack of trying.

But when you think about how hard we work?  How crazy busy we are?  The toll that takes?  Is it really worth it if you don’t stay connected?  I’m talking about those people who were digging cigarette butts out of an ashtray late into the night with you, the ones you rode shotgun with, when they took their mom’s car out for a spin with only a permit.  The people who really knew you.  Who know you.  You can’t keep them all.  But some of these connections could use some oxygen. Otherwise, what’s all this crazy-busyness all about?

PS: This song is best sung…at the top of your lungs.

He says, "Son can you play me a memory
I'm not really sure how it goes
But it's sad and it's sweet
And I knew it complete
When I wore a younger man's clothes"

He says, "Bill, I believe this is killing me"
As a smile ran away from his face
"Well, I'm sure that I could be a movie star
If I could get out of this place"

Now Paul is a real estate novelist
Who never had time for a wife
And he's talking with Davy, who's still in the Navy
And probably will be for life

And the piano sounds like a carnival
And the microphone smells like a beer
And they sit at the bar and put bread in my jar
And say "Man what are you doing here?"