Executive Development: What You Don’t Know CAN Hurt You

Intellectual horsepower, work ethic, and drive get you a long way in life. But a lot of really successful people often feel deep down there are a few things holding them back from unparalleled success. The trouble is, we don't know what those things might be.

What I’m talking about is self-awareness—the ability to see yourself and understand not only how others see you but why those are factors in failure or success.

So how do you eliminate those blind spots? Painful as it may sound, a 360 interview and feedback report will help you get insights that are hard to come by any other way.

A lot of people wonder why there sometimes is such a split between perception and reality. Decades ago, Joseph Luft and Harrington Ingham created a paradigm that helps explain it. They decided to mash up their first names to create what they called a “Johari Window.”  Their goal was to help people have better self-awareness as well as an improved ability to relate to others.

The way it works is kind of similar to the 360 interviews that we do as executive coaches.  You would choose words to describe yourself… and then others are asked to pick words that they would use to describe you.  Then the big question is answered: Do you see yourself as others see you?

There are four possible outcomes, as shown in the grid below.  Various folks have come up with different names for the four boxes.  Let’s walk through each of them.

As I mentioned, this grid was created as more of a psychological tool.  Psychotherapists, for example, try to help people increase the size of the Aligned Self while shrinking the Blind Self and, to some degree, the Secret Self.

But when I’ve mentioned the concept to our team of executive coaches recently, it has resonated with them immediately.  When we think about executive development and executive presence, this model is really relevant:

Executive development needs to start with an assessment phase.  Ignorance is not bliss: What you don’t know about yourself can definitely affect your success as a leader.  Understanding the gaps between how you see yourself and how others see you—as well as what are you today versus what you could be tomorrow as a leader—is the first step toward moving from Secret or Blind to Aware and Aligned. 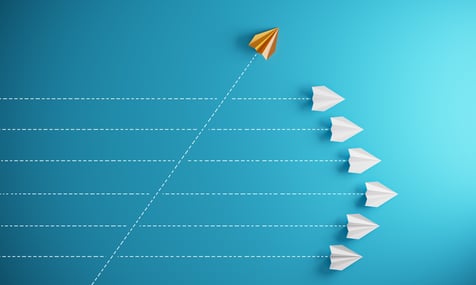 Webinar: Built to Pivot: Accelerate Your Recovery and Thrive