Do You Have Any Tongs? 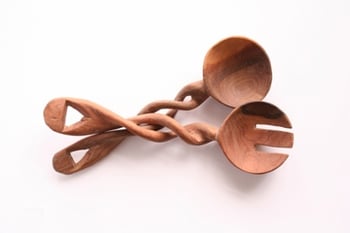 My husband and I are getting ready to "downsize" because like many people "our age," the house is getting bigger and we're basically living in four rooms, if you count the master bath. In a time-honored tradition, we thought we'd clear out the basement, cupboards and cabinets, and put together a little Saturday yard sale. We set the date, put an ad on Craigslist and prayed for good weather and lots of bargain hunters.

As a veteran (I've had three or four of these over the years,) I knew we'd have people there at 6:45 AM even though we were advertising the start time as 9:00. Sure enough, we hadn't even carried half the junk out of the garage before the first few rusty pick up trucks, beat-up vans and jalopies in need of new mufflers starting pulling up to the curb.

As you'd expect, it was a cast of characters. Interestingly, the early group was quite international. Vietnamese guys bought a drill and a tool bench; three generations of Russian women bargained hard on a blanket and a bowl of shells for a dollar a piece. There were neighbors from down the street, ironically on their way to the town dump to get rid of stuff, who couldn't resist a suitcase and some rugs.

Later, as the loot dwindled, there were more drive-bys. But most got out, even just to talk. An elderly women shouted from the car, "Do you have any tongs?" (We did not.) But then she got out to explain that she has a pair she doesn't want to give up, and she is searching for some for her granddaughter who moved into a new place. Whatever it cost her in gas to drive to our house would have purchased a fine pair of nice tongs at Target. But then again, that's really not the point.

It passed the time to talk to people and hear their stories. One 80 year old guy pulled up in a huge white van without windows. I peered inside and pulled back in horror seeing it already filled to the brim with a word that rhymes with rap. He stayed an hour and a half, I kid you not. He clearly had no one to talk to...but some great stories. Apparently in the sixties there was a Playboy Club in our quiet little suburb (who knew!) and he arranged for Ted Williams and some well known sportscasters to play a charity baseball game against 10 of the Playboy Bunnies for the Jimmy Fund. Williams hit a homer, 400 kids rushed the field, and it was such a crazy scene that one of the TV stations' helicopters had to touch down on the field and airlift him to safety. You simply cannot make this stuff up.

The more people we met, the more I was reminded that you can't judge a book by its cover. Some you would have sworn lived out of the cars they drove up in, turned out to be professors, librarians, mid-century furniture specialists and art dealers. One woman in a stained T-shirt, shoulders hunched, chose a few DVDs for her son who is in the service (we gave them to her of course.) She whispered it was top secret, but her son told her that ISIS has stolen some missiles from a secured US military site, their whereabouts are unknown. I have no idea whether there is any truth to it. The point is you wouldn't hear that at your typical neighborhood barbecue or in the employee cafeteria on your average Wednesday.

Ernest Hemingway once said, "I drink to make other people interesting," and I suppose being as famous as he was, he could be excused for numbing his brain from fans sucking up oxygen around him with a dry martini or two (apparently his real favorite drink, not mojitos.) Still, for the average Joe like me, it's kind of fun once in awhile to give yourself over to the conversations of strangers. You just never know how it might expand your view of the human experience.