Hidden in Plain Sight: The Secret but Obvious Behaviors of the Most Effective Teams

New research using data from our Bates LTPI™ reveals surprising insights into the difference makers for the most effective teams, and their ability to collaborate and work across other teams and functions. Based on our research on high performing teams, we now know definitively what behaviors and characteristics make teams more effective.

What We Learned: The “Hidden Secret”

Our analysis of LTPI™ survey feedback from over 250 raters showed that the behaviors that define a high performing team fell into two groups of highly related items that revealed the “hidden secret” behind the teams that scored the highest on an independent measure of team effectiveness. The teams rated by all raters as the most effective focused on two themes or factors:

How a team seeks and leverages external sources of information and opinions is as a significant factor in perceived team effectiveness as how they work with their teammates. Our research uniquely shows that how teams interact with resources outside their team is just as important as interactions within the team.

So, while this finding may be a case of the blindingly obvious once you hear it, most research on team effectiveness does not even look at how a team interacts with the world outside of the team. And, in a world where lack of cross-functional cooperation is a major factor in why companies fail to successfully execute their business objectives, how a team interacts with the world outside their own team needs to be better understood. And our assessment gives you a window into these behaviors.

We also found that some facets, or qualities, in our team assessment model have a greater correlation with the internal and external factors than others. Below is the LTPI™ model with the four facets that were found to be the most related with internal factors in yellow, the three with external factors in blue and one facet that traveled with both in green. 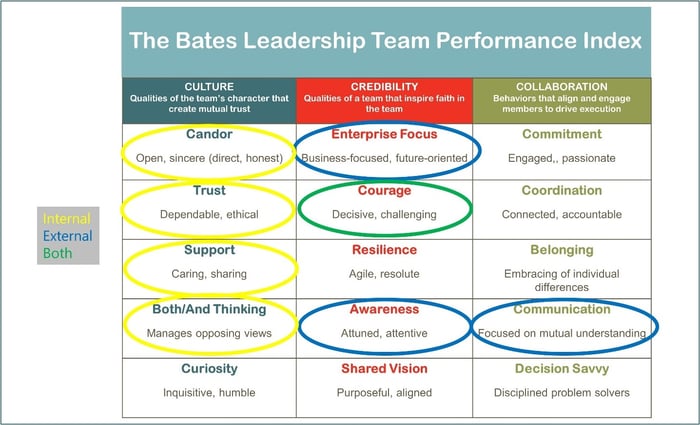 Two of the facets that go with the external factor, or the team’s relationship with other teams, (and shown circled in blue), are in the Credibility dimension which focuses a great deal on how the team inspires faith in people not on the team. And Communication, the third facet that strongly relates to the external factor has a number of items that focus on communicating with people outside of the team.

It also makes sense that Courage travels with both since some items are about having difficult conversations with teammates (internal to the team) and others about challenging people in power (often outside of the team).

Removing the Mystery: Predicting the Most Effective Teams

Our analysis of the LTPI™ data also included a separate question that asked all raters (team members, members of other teams, key stakeholders) to rate the team’s effectiveness on a 1-5 scale with a score of “5” meaning “extremely effective.” Our research showed that both the internal and external factors were highly predictive of a team’s perceived effectiveness. Teams that were rated higher on the internal or external factors were also significantly more likely to be scored a “4” or “5” on effectiveness. And if they were scored higher than other teams in both the internal and external factors, they were 96% more likely to be rated highly effective. So, with the most effective teams, being highly rated in both had a multiplier effect!

That is, the most effective teams pay as much attention to how they interact with people outside their team as they do to people on their team.

We have conclusively found that if you only look at skills, behaviors, and dynamics between team members, you are missing half the picture of what makes for a high performing team. The most effective teams know they are not islands, but are part of a network of teams and must be a “team player” with other teams. Organizations thrive not when individual teams are effective, but when effective teams leverage each other’s skills and perspectives.

This is great news for leaders and their teams, since the LTPI™ can provide a roadmap for improving team effectiveness. Teams can get feedback on those specific behaviors that are helping and hurting their perceived effectiveness. And when you can get data on where to prioritize to move the needle, you can get to the change you want, sooner and more readily.

Michael Seitchik is Consultant and Executive Coach and Director of Research and Assessment for Bates, now BTS Boston, where he helps senior executives succeed by providing valuable feedback and guidance on executive presence and influence. Michael is a certified Bates ExPI feedback provider, and contributes to the firm’s thought leadership and client experience innovations. For over 30 years, Michael has been helping successful senior executives through coaching and custom executive education workshops. Prior to joining Bates, Michael operated a successful firm specializing in executive education, coaching and team development, and was previously Managing Director of Executive Education Services at RHR International, where he developed unique and powerful approaches to executive development.