How Bad Companies Get Better: The Formula for Brand Recovery

The exposed abuse of women fostered by the long-standing bro-culture in this country has sparked collective outrage, as it should.  All women, and all good men, are asking how did it take so long?  Characters including Charlie Rose, Harvey Weinstein, Kevin Spacey, Roy Moore, Al Franken, Louis C.K. and the first poster-boy, Bill O’Reilly, will not be admitted back into civil society. However, the institutions that enabled this behavior still have brands to protect, and I believe there will be harder scrutiny on the powerful media companies and political parties that looked the other way, for decades.

This has not only been the year of bad boys, it’s been a pretty awful year for companies getting into other types of trouble, from Equifax’s data breach, to Uber’s lawless culture, Wells Fargo’s phony accounts, and Samsung’s exploding Galaxy Note. Share prices have tumbled, and executives have been sent packing. Now, the companies must deal with the backlash of business disruption and potentially long-lingering brand damage. It can take years, even decades, for a company to recover from the mistakes and deliberate decisions that are always a result of leadership arrogance and failure to act.

Some companies do manage to recover and even thrive after a crisis. How do they do it? Is it that their bad isn’t as bad as other’s bad? Are their brands stronger? Or do they respond differently when crisis comes knocking?

A classic business case from more than a decade ago highlights how recovery happens. In late 2001, Martha Stewart sold all of her shares of ImClone Systems after illegally receiving information that the stock was in trouble. Once charged, she owned up, and was found guilty in 2004, after stepping down as CEO and chairwoman of her company.

What happened next is what makes it a textbook case. Stewart opted to start serving her federal prison term immediately, and while in prison became a model prisoner and liaison for other inmates. When she returned to business, she launched TV shows, wrote a book, and rejoined the board of her company which is still thriving today. Stewart was media savvy, put her brand above lawyering her way out, and took the right actions to restore her reputation.

I spent 20 years in journalism covering the bad news, and bad actors. I’ve spent another decade working with senior executives in some of the top companies in the world. It’s helped me develop a view that there is in fact a formula that can hasten a come-back.

I call this the Rapid Recovery Model. The model is simple, though the steps are difficult, especially when companies find themselves caught unaware in a crisis, and they lack leadership or a moral compass. For the model to work, leadership must rise to the occasion and follow the three steps.  It isn’t enough to execute on one or two. Restoring the faith of customers, employees, investors, and the public, requires leaders to attend to all three. 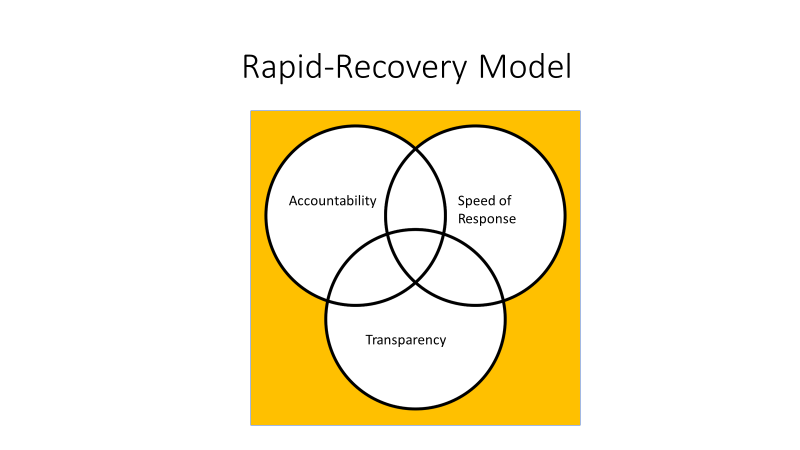 The three required conditions are: 1) accountability (willingness to accept responsibility or to account for one's actions)  2) speed of response (prompt, truthful acknowledgment of an issue) and 3) transparency (straightforward candor without excuse, blame or retribution)

Why don’t two out of three cut it? Let’s look at three scenarios, where one condition is missing: 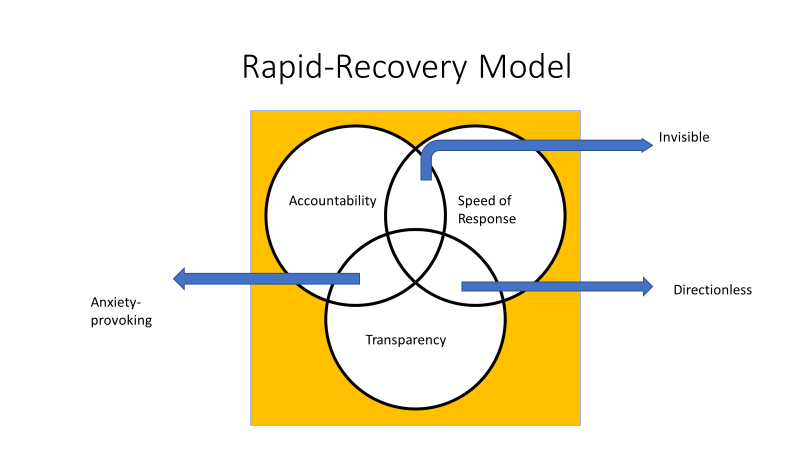 When all three conditions exist because of good leadership, it is possible for companies to recover and even thrive. Let’s take a current example, as a way of imagining whether it could work.

Uber’s board and new leadership ousted the founder and met some issues head on, an example of the use of this model. Though the company’s future still seems rocky, there are signs they have done some of the right things.

For instance, Uber’s board of directors voted for governance changes that reshaped the balance of power. Though a private company, not required to make its deliberations public, it did so anyway.   Uber’s new CEO Dara Khosrowshahi also sent a message to Uber employees stating the importance of acting with integrity in the markets it serves. It was a message that people will be held accountable for new standards of integrity. Check all three boxes, for now.

The story is still unfolding, with the exposure of shady business practices that included skirting regional regulations around the world. The story will be written when we see whether it continues to adhere closely to the principles of recovery. This could see it through to a successful public offering in 2019.  The world’s most valuable privately held company still excites Wall Street and investors worldwide, if Uber’s brand doesn’t sink under the weight of its self-made mess.

We have all seen what happens when companies don’t execute on all three. In July of this year, Wells Fargo had to own up to another failure. It admitted that it forced auto insurance on more than half a million borrowers who didn't need it. This after its failure to disclose to Congress at its September 2016 hearings that its employees had been encouraged to create millions of fake bank accounts. While Wells Fargo executives say they have changed their practices and now hold people accountable to a different standard, their slow response, lack of accountability and lack of transparency has left the company’s reputation in a state of perpetual shambles.

There are more than enough examples of poor response to crisis. The first mistake companies make is to search for blame instead of cause. Cause always starts at the top. It is always leadership culture. It takes leaders with integrity, humility and confidence to do what can feel counterintuitive in litigious world. Acting in the long-term interest of the company means acting rapidly, being transparent, and holding people accountable. It is the only way to survive and eventually thrive.