A few years ago, our family flew from Boston to Iceland for a two-week vacation.  The flight is only 4 ½ hours, so I was happy enough to occupy myself by reading while sampling some chocolate-covered licorice—a popular Icelandic treat. 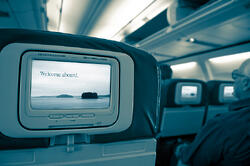 Predictably, however, I got a little restless after about three hours.  So I started fiddling around with the soft-touch video screen on the seatback in front of me.  I checked out our flight path and looked at a tourism video.  Then I noticed another tab on the screen: “Surveys.”

Why not?  I shrugged and clicked on the tab.  Immediately, a message came up: “There are no surveys at this time.”  Oh, well. But then I noticed that there were two buttons below the statement.  One said “True” and the other said “False.”

I suddenly felt like I was faced by one of those existential riddles.  You know: “If a tree falls in a forest and no one is there to hear it, does it make a sound?”

So I tried to think of how to respond to this “survey question.”  Was it really true that there were no surveys at this time?  It seemed that way, but I puzzled over which choice to make.

I finally selected “True.”  To my amazement, another message popped up: “Thank you for participating in the survey.”

What?!  Did this mean that there really was a survey? Although I knew that I probably had just stumbled on some sort of technical glitch, I couldn’t help feeling like I had been given a one-question test… and I had managed to get it wrong!

As I was thinking about this experience recently, I could see some parallels to what we face as business leaders.  In the digital age, we all rely heavily on the one-way communication of emails.  How many times have you read an email that left you just as perplexed as I was when trying to make sense of that Icelandaic survey?  Too often, you can end up exchanging a handful of emails over several days in order to get clear on something that could have been resolved with a 20-second meeting or phone call.

But what really haunts me is the other end of it.  What if I’m sending out emails to my stakeholders that are leaving them as baffled, dejected, and incredulous as I was over that survey?  I may never know.  They may quietly brood over my message, or they might just hit “delete.”  That’s another risk of relying on one-way communication: You often get no real data on how your message went over.

Email is a necessary and invaluable communication vehicle.  But many leaders use it as their default vehicle rather than making more deliberate choices about which vehicles to use in different situations. When you use email, it’s going to be much more difficult to convey your authenticity, your concern, and your vision.  It’s also going to be very hard to have real dialog with your stakeholders, as so much is lost when we take away the inflection, emotion, body language, and facial expressions that we can read and react to in a face-to-face meeting or on a videoconference.

When you rely too much on one-way communication, you might have as much trouble as I did determining what’s true or false.

On Video, Amp Up Your Presence with Your FIELD of Vision

Three Mistakes Leaders Are Making During the COVID Crisis