The economy is humming in the US, and yet as I travel around and meet with leadership teams what I hear, barely concealed beneath the surface of polite strategy conversations, is essentially, fear. The fundamentals are undeniably strong, yet many in senior management are waking up in the morning looking for the other shoe to drop any second. As a friend of mine says, "too many people start the day ready for a long, slow crawl through enemy territory."

I'm not suggesting there isn't always reason to be prudent, but when your concerns insidiously erode your confidence, you are prone to communicate the wrong message. Without giving some thought to how to communicate an inspiring vision, you will telegraph anxiety, which soon sucks the life out of the organization. Telling people to be more efficient and productive doesn't make them so; it sends them into survival mode. What they hear, when they are told to buckle down, isn't "be creative"; its "lay low". 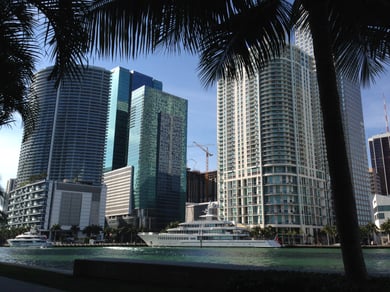 With a few recent management conversations fresh in my mind, I found myself walking near the Mandarin Hotel in downtown Miami admiring the skyline. I came across a placard stating that eight of the tallest, most stunning skyscrapers have gone up since 2005. Yes, in 2010 they tapped the brakes, but even then a one billion dollar underground port tunnel was being drawn up and built. Today it is anticipated that the tunnel will keep a million trucks a year off Miami's downtown streets.

You can name any number of factors for Miami's boom and you'd be right. But you can't deny that at its core is a human quality: confidence. Somebody drew up plans, secured financing and did it. They prudently assessed risk and took responsibility for the outcome.

Since we developed our new model of executive presence, I've been asked by a number of leaders how we define confidence here at Bates. In the model, the facet of Confidence finds its way into the dimension of Substance - mature qualities of leadership we develop over time. When you combine this with Vision, also in the Substance dimension, you get a leader who not only has a big idea, but inspires others to believe it is possible.

The question I ask you to consider is: what do you need to start today? When you have assessed the risk and found it's reasonable to forge ahead, what’s stopping you? Would you rather take that long, slow crawl through enemy territory, or get up tomorrow and start constructing your future? What will you regret if you don't start today because it felt a little risky?